I'm seeing packet loss at one hop in PingPlotter. What does it mean? 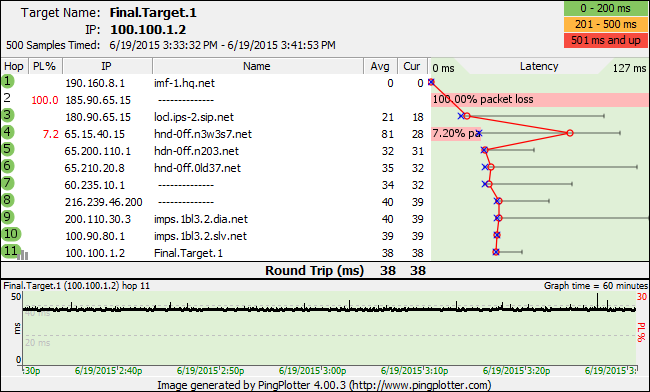 First, it's really important to understand that the only hop that matters is the final destination. If the final hop (your target) is showing 0% packet loss and acceptable latency, then all the hops before that can show all kinds of errors and it doesn't matter. As long as the final destination isn't affected, then all other latency and packet loss is an artifact of router configuration (or similar), and there is no problem.

Some servers (and some routers) may specifically block (or down-prioritize) ICMP echo requests or where TTL=0. These routers (or the final destination) might show 100% packet loss or high packet loss and latency.

Ideally, you want to correlate some less-than-acceptable behavior of some other application to packet loss or latency in PingPlotter. Examples of other application problems: Game Lag, Voice over IP dropouts and bad sound quality, slow web browsing, or temporarily frozen stock tickers. If you can correlate this behavior to periods of packet loss or high latency in PingPlotter, then your data in PingPlotter is probably going to present a really compelling story to the person you need to convince of the problem.

Our new Reader service lets us do the hard troubleshooting work while you do other things with your time.

There are no attachments for this article.